As in many gamedev stories, Poom should not have existed.

It came to be possible on Pico8 thanks to a (still unpublished) project, an Assault demake - a game I used to play at arcades as a kid (dual stick! excellent music! ultra low bass explosions!).

Early 2020, quite proud of my silky smooth rotozoom engine running entirely in memory, well below 50% cpu with enemy units.

Engine is looking good, time to export to HTML and demo it. I run a couple of tests on my home computers and mobiles...

It did not went well, performance was all over the place and required a powerful PC to run at full speed.

Reporting the bug (?) to Zep (Joseph White, Pico8 author), it became apparent the game relied too much on binary operations and trashed the web player. The delicate balance of simulated API costs did not account for so many "low level" operations per frame.

Too much binary ops? Nah...

Long story short, Pico8 0.2 is out shortly after - binary operators and tline ("textured line") are a thing...

The new addition to the Pico8 API manual reads:

Assault port to tline proved the huge potential of the function:

Half joking I told Zep about the flood of Doom clones we will have in no time...

What if, say, I dig myself a bit more into binary space partitioning (BSP trees) & portals?

A sign that current project is going to have some competition...

Driven by portability & extensibility, level geometry is now expressed using an open text format (UDMF), saving the need for tedious binary unpacking of WAD structure (to some extent...) and perfect for quick hacking.

May 9-10th: armed with Real-Time Collision Detection from Christer Ericson, ANTLR for UDMF parsing and a good pinch of Python I got my first BSP compiler up and a running Pico8 renderer: 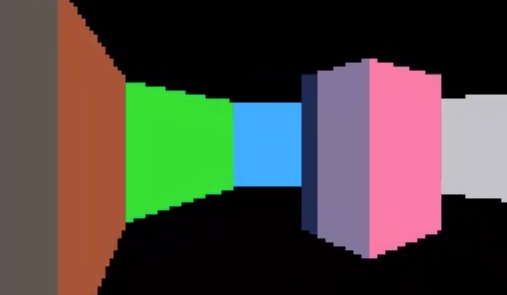 Sorry Assault, see you on the other side!

Next 2 weeks are spent digging into WAD structure (I think I know what a linedef is by now...) and going over Zdoom wiki a million times. 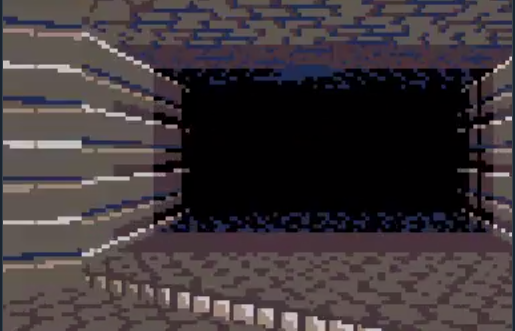 Quake To The Rescue

Since textures are in, the engine departed from "canon" front-to-back Doom rendering to back to front.

I really never thought front to back woudl work anyway - programming for Pico8 is more akin to targeting a very low end GPU.

As per Doom standard, perspective correct texturing & shading work for cheap as long as the world is made of flat walls & floors.

Back to front rendering means loosing natural "narrowing" of level scanning of standard Doom (see Black Book for an extensive explanation!) and the limited performance impact of large levels that comes with it.

I knew Quake had the same issue and solved it using a Potentially Visible Set (PVS). A PVS, generated at compile time, is the set of all potentially visible convex sub-sectors from any given given sub-sector (read it twice, slowly!).

Some more Python code & maths (and cursing!), it works!!! 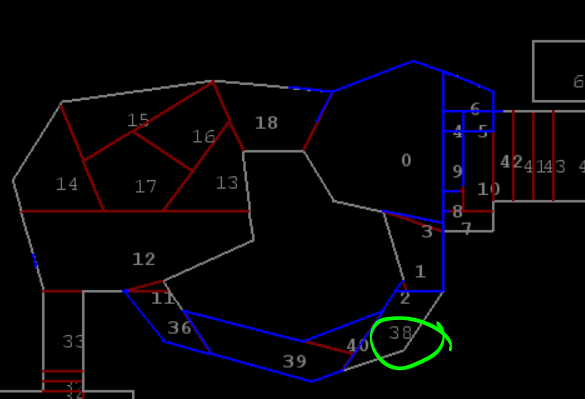 bold numbers are all sub-sectors visibles from sub-sector 38

Surprisingly, there is little literature on how to generate a proper PVS, most notable sources I found:

PVS is encoded as a bitfield, stored as 32bits chunks to keep memory usage under control (a much simpler version than RLE encoding of Quake PVS):

Working some more on getting rotating sprites into game engine, it is obvious sprite real-estate is going to be a major pain point. For reference, a single soldier pose is eating almost half of the space available. And that's for a "small" sprite... 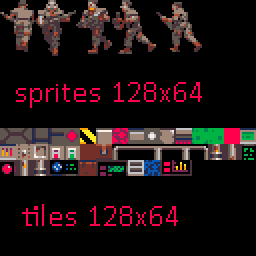 I knew the game would be multi-cart, that is, storage may not be my main concern and Pico8 has a large 2MB of LUA ram to play with.

What if sprites could fit in memory, how to then best use built-in Pico8 sprite scaling capabilities (read, sspr)?

What if I had some kind of fast memory allocator? Last recenly used cache is a  good design pattern for this case, simple enough if chunks are of fixed size.

What if I split sprites into little (but not too small) chunks, say 16x16 and get their actual sprite location from that "virtual memory" allocator?

July 15th, this is indeed a very workable approach - memcpy is fast enough to swap required sprite tiles on the fly. Sprites can be up to 16 tiles, e.g. up 64 by 64 pixels, allowing large monsters like Cyberdemon at 1/2 of their original size.

Virtual Sprite Engine (tm!) integrated in game - monsters can be much more than a blurry pixelated mess!

Actors are registered in each sub-sector they are touching, based on their radius. Multiple actors on a given sub-sector are sorted using a basic insertion sort, assuming the number of "co-located" actors is usually low:

Once sorted, sprites are rendered right after sector's polygons.

See how back to front rendering of convex sectors are erasing part of Cacodaemon in below gif. Sprite is rendered multiple times, and the last render (in the nearest sub-sector) fixes the image:

Summer time, at this point, my goal is clear: make the engine as easy as possible to work with an artist, I'll need a team to realize the vision.

The DECORATE format is brilliant!

Each "thing" runs it's own little state machine, can reference sprites and call game functions:

The runtime part is simple enough to fit in less than 20 lines of code:

Best of all, everything in game is described using the same syntax: weapons, bullets, items & monsters!

By August, I have a Python package that can be easily installed. Compiler supports many of key Doom features (doors, platforms, monsters, infigthing, multiple weapons, pick ups, difficulty levels...).

End August, I am reaching out to Paranoid Cactus (of X-Zero fame and I am total fan of his work!), let's wait and see...

Paranoid Cactus (Simon Hulsinga IRL) replies a couple of days after and seems to be interested - good news! 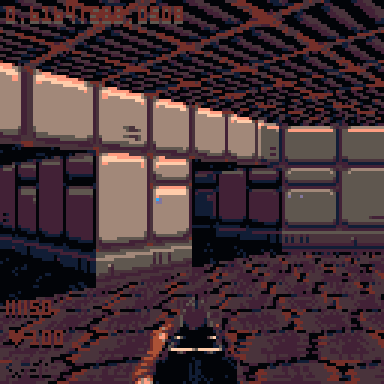 wow (it became my favorite expression throughout the project)

Code is almost complete, we should be shipping by what, end September?

It so happens that Simon is a multi-classed gamedev, mastering code, art, music & gameplay (yeah, life is unfair!).

Paranoid Cactus takes the lead on gameplay decisions, we both get into a routine of challenging current features, reworking the engine to support ever increasing details while keeping tokens in check. To name a few:

So far it looks like everything went smooth and nice... It did not!

Collision went through major refactoring multiple times to make world feels solid - one of the key point of Doom.

I was actually surprised to find that Doom used a different data model to handle collision (well known BLOCKMAP), when BSP would have a perfect match (Black Book & Carmack notes confirm it was a missed opportunity).

Poom collision code generates a list of linedefs traversed along a ray, using the BSP to traverse the world in order.

One day you have a super solid collision routine, the next day you got that gif:

Root cause is that a BSP tree loose sector spatial relationship, e.g. 2 walls might be on 2 different part of the tree, leaving a kind of "gap" when handling collision in sequence.

Solution was to treat each wall as a capsule (e.g. a ray with a radius), ensuring player path cannot fall in between wall segments.

PVS calculation has also been quite tricky to get right in all cases. When failing, whole sectors would end up disapearing from screen (dubbed "black sectors" by me and Simon).

Getting back to Chris Ericson reference, correct PVS calculation algorithm ended up as:

Compression was not supported until late in game developpement, I had already a LZW encoder for Assault that worked rather well.

Thing is, I soon realized that LZW decompression is a memory hog, certainly not compatible with a game already stretching available RAM...

Google to the rescue, I was sure the embedded crowd had something for me.

A random post on some Arduino forum lead me to this: https://www.excamera.com/sphinx/article-compression.html

Compression ratio is about 50%, does a good enough job on picture and world data.

That roadblock was a big one - playing levels back to back would tip the game over the 2MB limit.

Below is the kind of chart I used to find out if I was battling a garbage collection bug or dependency cycles or some other bugs...

The game went though heavy refactoring at this point:

Poom appeal would have been nothing without the right pixels - and we needed many many pixels...

Best part of the September to December was spent redrawing the selected cast to reach the right level of quality.

Pico8 games are all about making choices, even with such a large game, not every idea could make it.

As obvious as it seems, once you have spent some months working on a game, having a pair of fresh eyes is invaluable.

The most notable addition was mouse support (quoting Tom "I want mouse support"), wiring "mouse lock" browser handler to Pico8 GPIO to communicate coordinates back to the game.

Demoing that to Zep certainly helped bring mouse lock as a native Pico8 feature (with a under the cover patch delivered in the wee hours of the night!) - Thanks!

Behond the technique, the main take away is that such large game would have been difficult to pull out without teamwork, kind words & contributions from the extended Pico8 community (hey @farbs, @nucleartide, @sam, @valeradhd...!) .

Thank you all for that (and thanks Id Software for such a timeless game)!

Reading gave you some new gameplay ideas, want to rework sprites or try to improve engine?
Hesitate no more, a full blown SDK is there - the same tools we used to make the game!
Poom SDK (support Discord: https://discord.gg/Bmc4nxjfuE)

Thanks for the write up and the sdk.

happy to know if you do anything with it!!

Thanks a lot for the write-up, really interesting!

Delightful read.  Thanks for writing it all out.

very cool in-depth write-up for one of the most badass games on the site :)

Amazing! Thanks for sharing!